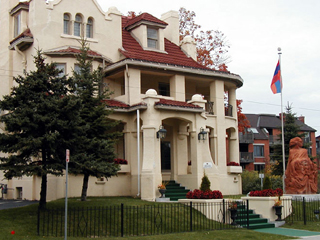 The Embassy of the Republic of Armenia is housed in a beautiful Spanish Colonial Revival style mansion at 7 Delaware Avenue in Ottawa. The first resident of the mansion was John H. Gorman, manager of the St. Lawrence Pulp and Paper Company in 1908. He resided there from 1908 until 1914.

In 1914, Donald H. Maclean, a barrister, spent one year at 7 Delaware Avenue, after which the building was vacant for one year.

One of the longest residents of the mansion was John Gleeson, the president of Standard Paving Limited, who lived there until 1946 (pictured below with his wife).

In 1922, the mansion was remodeled by W. E. Noffke. The exterior walls were redone in honey-beige stucco.

After two more years of vacancy, the mansion housed the Uruguayan Embassy which was to be the first of three foreign missions.
The Royal Canadian Air Force Division occupied the building from 1951 for twelve years.

After another year of vacancy, the Embassy of the Hungarian People's Republic was located at 7 Delaware Avenue for a period of thirty years, from 1965 until 1995.

In 1995 the mansion was purchased and donated to the Republic of Armenia by a prominent Armenian-American businessman and philanthropist Sarkis Acopian in memory of his parents, Doctors Grigor and Arax Acopian. In March 1995 the Embassy of the Republic of Armenia in Canada became the third foreign mission to occupy the historical mansion at 7 Delaware Avenue.

The mansion was renovated in 2005 by a group of Armenian architects and constructors. The monument "Armenia Immortal" (sculptor Levon Tokmadjian), situated in front of the Embassy, was unveiled on September 21, 2002.

In 2008 the mansion received a "Heritage Designation" by the City Hall of Ottawa. As a part of Ottawa's cultural heritage, the Embassy opens its doors every year to welcome hundreds of visitors, who are interested in the architecture of the building and the rich history of Armenia.